{Green Beans and the boys:} 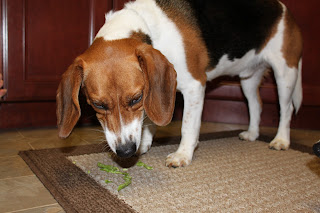 Last night Jon and I were cooking meals for his dad. Jon cooked a whole bag of frozen burgers and I made my venison chili. All this happened at 9pm after fishing.  I could not believe that I forgot my memory card for my camera when we were out fishing. Silly me! Also, Last night we picked our first cucumber. I think that I am going to try and make pickles out of them once we try this first one. We are going to have so many cucumbers that I will have to end up giving alot of them away. 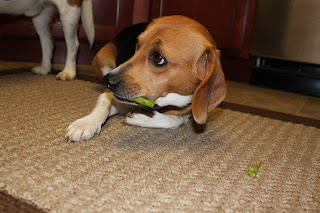 I had a couple of green beans on the counter and wanted to see if Shooter and Hank would like them. They were so funny when they were eating them. Hank did not know what to do and thought Shooter was going to steal his everytime so he was keeping a eye on Shooter. Shooter ripped the green bean apart but did not eat it at all. Just left everything on the rug after he was finished with it.