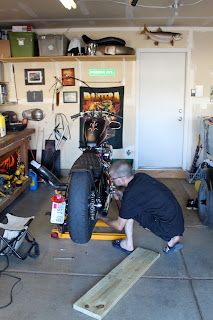 Tonight Jon worked on his bike since there was a problem with it. I guess there was a bolt that snapped off and was stuck in the frame. I think he got it out but not sure since I was on the phone with my mom checking on how my dad is doing. Recently over the weekend when we were on vacation he came down with a cause of the shingles. My mom and I thought that you only got shingles if you did not get chicken pox’s when you were younger but that is the total opposite. My dad is feeling a little worse than normal but I hope he pulls through and the medication is helping.
We received some good news about Jon's dad over the weekend. For once it is nice to hear that someone is doing good! When I came home the boys who were so happy to see me and it made my day like it does everyday. Tonight was Jon’s night to cook and we have steak fajitas. They were very tasty! 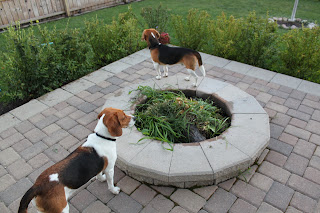 After dinner I started to weed since everything must have sprouted when we were on vacation. There were so many weeds in the backyard! Jon ended up helping me which made it go a lot faster. Now we are watching T.V. and relaxing waiting for the weekend to start. I think that Jon and I already need another vacation.