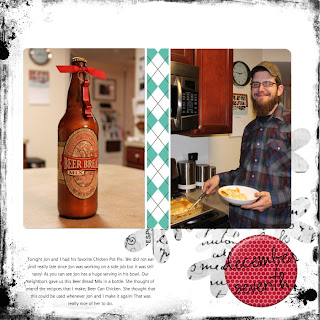 Tonight Jon and I had his favorite Chicken Pot Pie. We did not eat until really late since Jon was working on a side job but it was still tasty! As you can see Jon has a huge serving in his bowl. Our neightbors gave us this Beer Bread MIx in a bottle. She thought of one of the recipces that I make; Beer Can Chicken. She thought that this could be used whenever Jon and I make it again! That was really nice of her to do. Tonight I also was working out to Wii Active and I think that I pulled something in my back. Not good. So right now I am sitting on the couch with a heating pad trying to make it feel better.