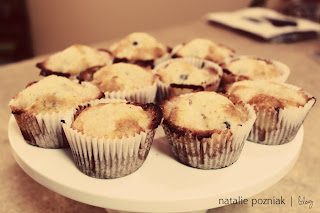 What a sad sad day! Today while multitasking cooking dinner, making blueberry muffin, talking to my mom and trying to wash dishes I (cannot believe this) burned the muffins! I am in utter shock. From the photo they do not look to bad but I had Jon taste one and they are burnt. I realized that I set the oven to 475 degrees instead on 425 degrees. Then while talking to my mom on the phone the smoke detectors were going off. I think that was my hint right there. Once I realized that I set the oven too high I set it back down and opened the oven thinking that would help but it did not. Oh well. What a waste of time. Now I know to read more carefully. 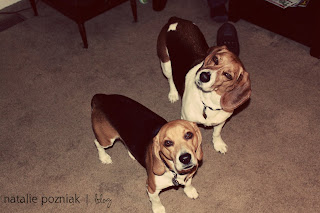 Jon was off today and took the boys for a WALK. They went to a near by forest preserve. They were only there for a short while since Jon saw two coyotes there and did not want to chance it with the boys. Good part on him. Jon is right now play Wii Racing game again. I swear I think that he has played this ALL day. That's ok since I am blogging most of the night. So its a win win situation. I am trying to figure out a new header for my blog so hopefully I will be able to have that up and running tonight. One more day until the weekend. YEAH!

Take a photo challenge too!
Foto Friday
Show off Your Shot
A Few of My Favorite Things