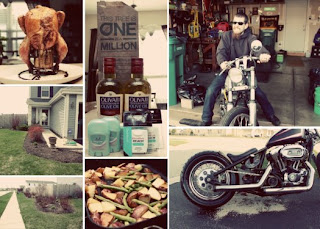 Saturday was a busy day for me. I ended up sleeping a little later than normal. 8am I know really late! I started to clean the house and getting my grocery list set. I went to Wal-Mart and got some FREE items and Olive oil for 3.00 a piece. Not bad! I went to Lowes to also pick up my FREE tree that they were giving away. I was excited that they still had some since I went later than I wanted to. We ended up having Beer Can Chicken for Dinner with Roasted Potatoes and Green Beans. When Jon came home around 4pm he went for a ride on his bike. Then the line for the oil ended up coming undone and we had oil everywhere. At least he was not stranded on the side of the road... Good thing it happened in the driveway when he came back.