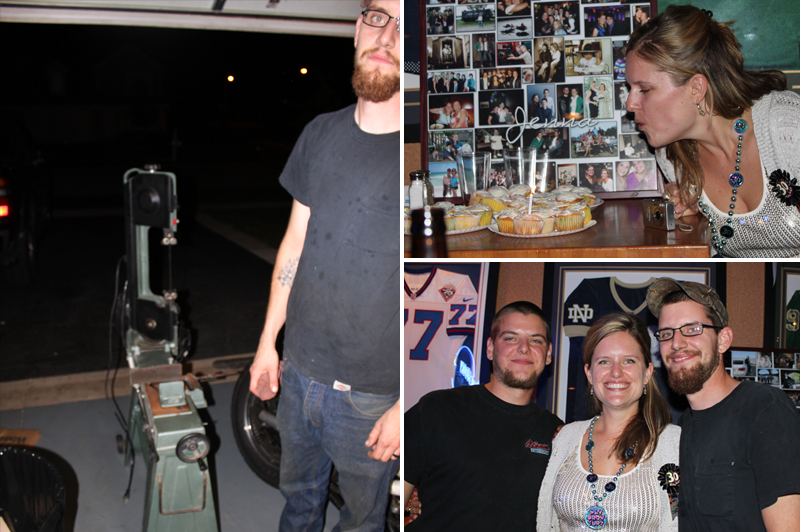 Why Hello! I have been gone for awhile but I'm back. I started to think that I needed to try something different with my blog so I wanted to post once I week and share what Jon and I have been up to during that week's post. 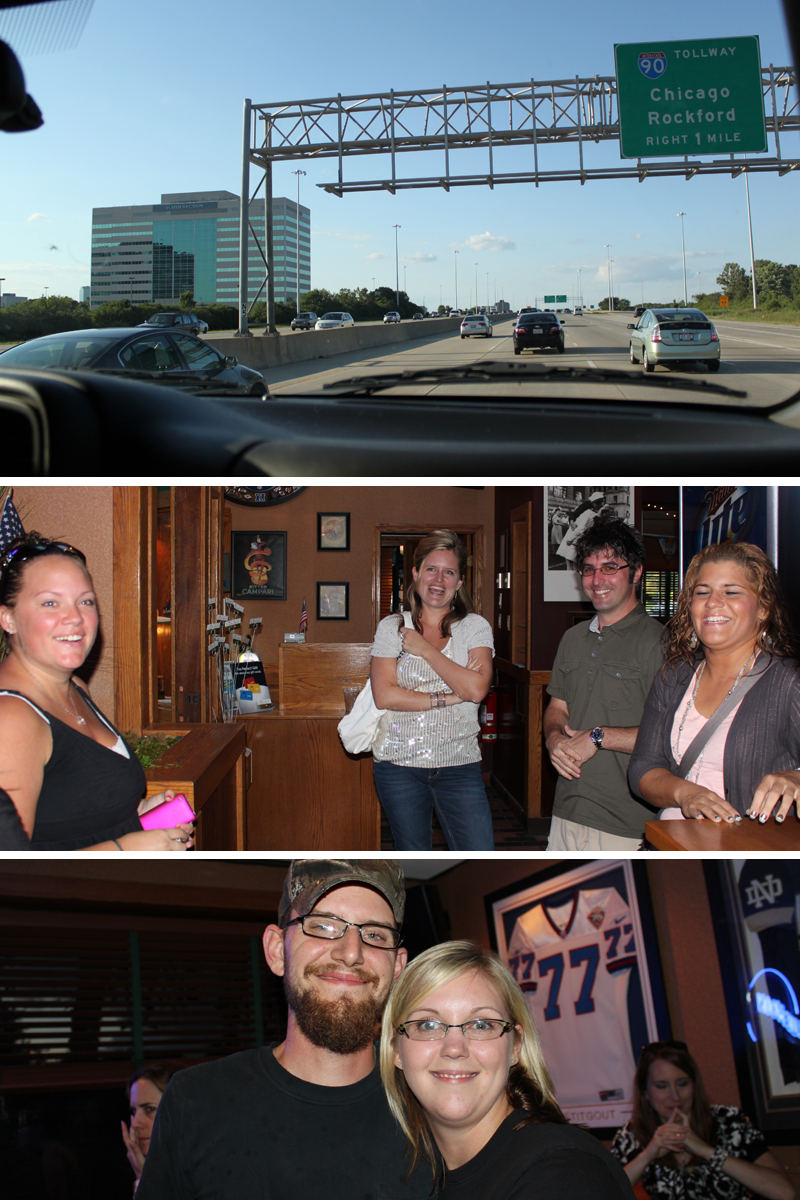 On Tuesday night we head up North for a surprise Birthday Party for Jon's sister. It was a great night hanging out with family and friends. Jon’s sister was surprised which was a good thing. We thought that we were going to be late to the party but we actually were a half hour early. So we hung out at the Tavern waiting to go in. Later that night Jenna said that she sort of knew something was going on for her birthday. It was funny when she walked in and did not know what to think. Her friend from 2 hours away even showed up to partake in the celebration.While heading up north I started taking a ton of photos. I need to really be committed to this. I take a lot of photos but I need to push myself and have the camera and I become one. It might take a while but I will get there. I can already see a difference in my photography with my food photography. I wish that my foot was better so Jon and the boys and I could go on hikes. But must wait until it heals all the way. Jon ended up getting a band saw for their company last night. I could not believe that they only bought it for 100! What a great find. Jon ended up trying it out last night at 11pm. I headed up stairs to go to bed since I was so exhausted from the day. 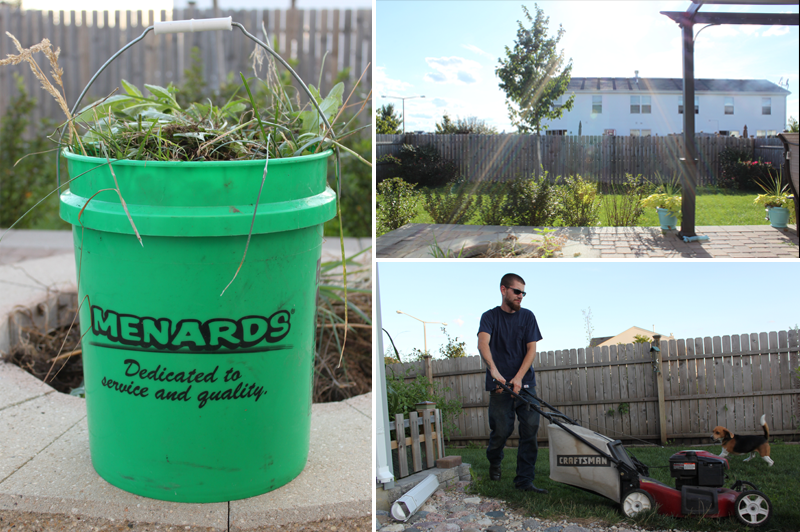 On Wednesday the temperature outside in only 68 degrees. I cannot wait to have the windows and doors open having the fresh air in the house. Fall is my favorite time of year. Sometimes I wish that it could be fall all year long. This whole week is suppose to be nice and cool. I think that it is time to turn the A/C off now. Since it is probably will be cooler outside then the house.
Wednesday I worked in the backyard pulling weeds and trimming our rose bushes. Things have really been overgrown back there since I have not been able to do much with this broken foot. My whole yard front and back has been neglected for this whole year. Which I am sad since I cannot ask my Dad anymore what to do with it anymore. I have to just remember everything that he told me and what I had watched when a little girl helping in the yard. I think that is another reason that I have had no motivation to work on my yard. I not regret that I did not keep up with it but I think our yard understands. I hope. 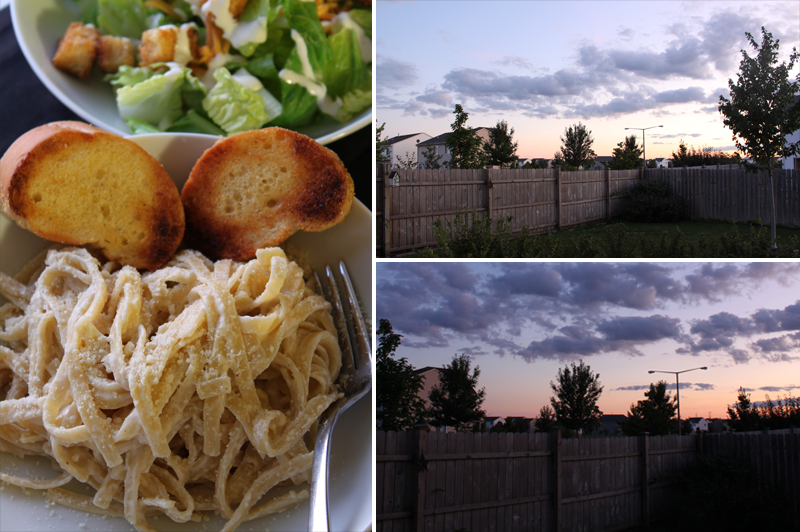 We had Fettuccine Alfredo with homemade garlic bread and a side salad for dinner. It was really filling. Jon cut the lawn tonight since now that it has rained so much our grass is growing out of control. But at least we have a green lawn again. There are a few brown spots in the lawn but hopefully by the end of the season they will be gone. I cannot wait to get my hands dirty and in the soil again. It has been too long. I started to price out how much it would be to get top soil. I never knew it was so cheap. I figured like everything else sold a home improvement store that it would be $3-$5 per bag. But I was wrong. Yeah since I have a ton of bags to buy. We mostly have clay in the backyard; well our whole yard. You dig maybe about 2-3ft and then you see clay. Some plants take very well to it but others do not. Jon and I are lucky when they built our home we got a ton of top soil compared to other homes in the neighborhood. I have a million things that I need to get done this week. I have no clue where to begin. I better start my list soon otherwise this whole week will be gone before I know it! 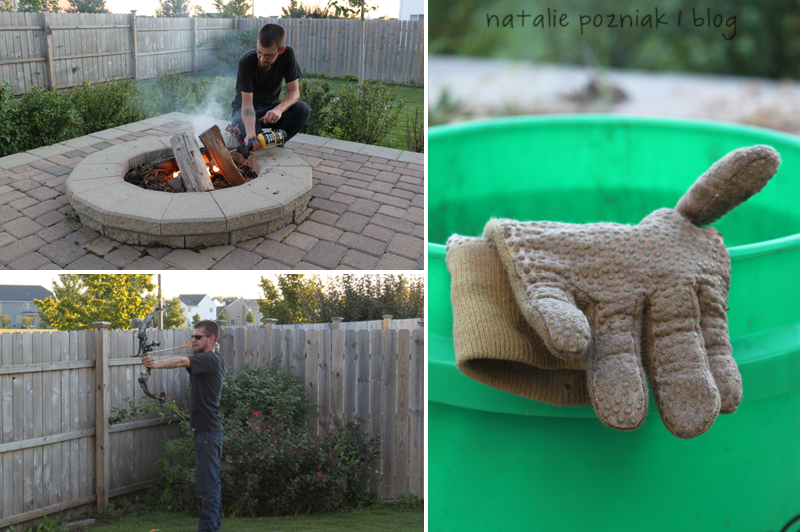 I always check my emails to see what kind of day I will be having. I noticed that I had sent an email to my work email which I do not remember doing. I found out later that my email account got hacked into and sent out junk emails to everyone in my address book. Not a happy camper right now. I ended up having to close that account just to be on the safe side. I really never use that email account expect for things that I need to sign up for. So I closed it. My mom ended up emailing me back asking if I really sent it. I told her no. I guess it was a Viagra email that I sent. Kind of funny. I think Jon had the same thing when his got his email account hacked into. I pulled more weeds while talking to my mom on the phone last night. I even trimmed the bushes around the patio. I think that today I will be finishing up the beds around the patio and turn the dirt and put Preen down for the weeds. Hopefully that will work… We need topsoil and mulch badly. For the last 2 years my Dad has always given Jon and I mulch but since he passed earlier this year you never realize what you had taken for granted. I always say a maintained lawn and flower beds since I was younger. Then when Jon and I moved into our house it was kept that way too because of my Dad. This year has been different. I feel like I cannot keep up with the yard and things are just popping up all around me. I need to tackle the yard and make my Dad proud. It’s not an easy tasked but it will get done hopefully. Little by little. 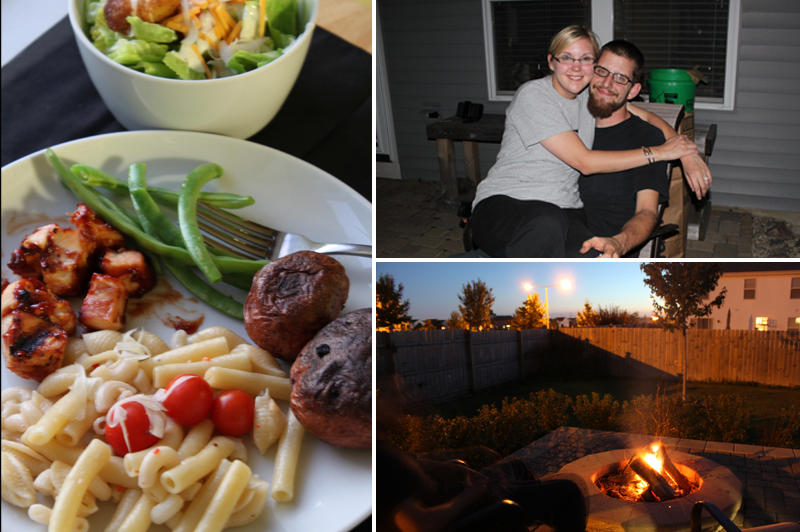 I ended up making chicken kabobs with grilled potatoes, pasta salad, and a side salad. I did make our green beans that I had frozen early last month and realized that I forgot to cook them first. They were soggy after they defrosted. Lesson learned. Hopefully I can get more out of the garden before the end of the year. Jon and I had a bond fire last night. It was so peaceful except for the bugs. I played around with my camera the whole night trying to master the manual part of the camera. So far I am doing ok. I have to learn more and take more photos at different setting just to make sure I get the correct exposure. So far it has been nice just playing around and not having to worry about posting something on my blog each night. I think that I need to start adjusting my photos now since I took so many. So far I think that I have taken over 500 photos. Not bad. 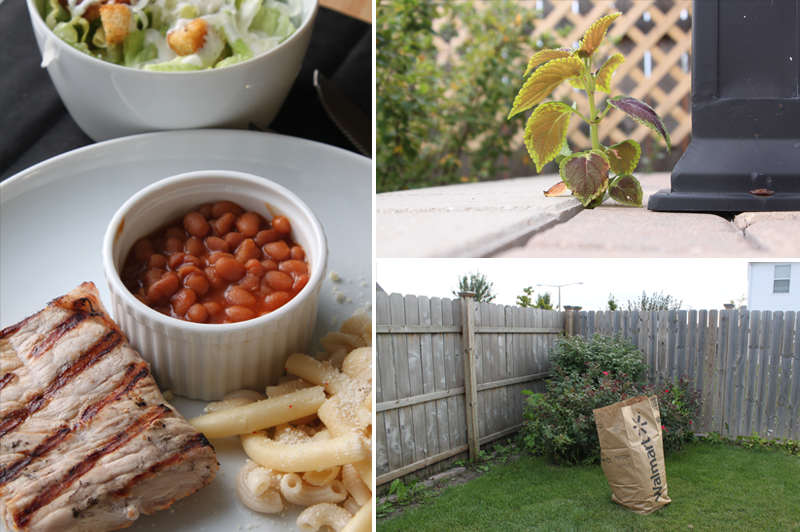 It is finally Friday! Actually the week flew by. Not sure if that is a good thing since the weekend will just go as quickly. Jon and I have a busy weekend. Depending on how the weather is we might go and see our friend race at a dirt track or see our friends that just got back from their honeymoon.
I ended up cutting the rose brushes and the burning bushes. The bugs were too much for me in the backyard that I had to stop. Jon came home to shoot his bow again. He is really getting good at it. For dinner we had pork chops with baked beans and some of the leftover pasta salad from the other day.
I found this plant that is growing in our patio. I have this plant in a teapot on the patio table. I think that some pollen or seeds must have flown over there and it seeded itself. I kept it there since it looks kinda of neat. 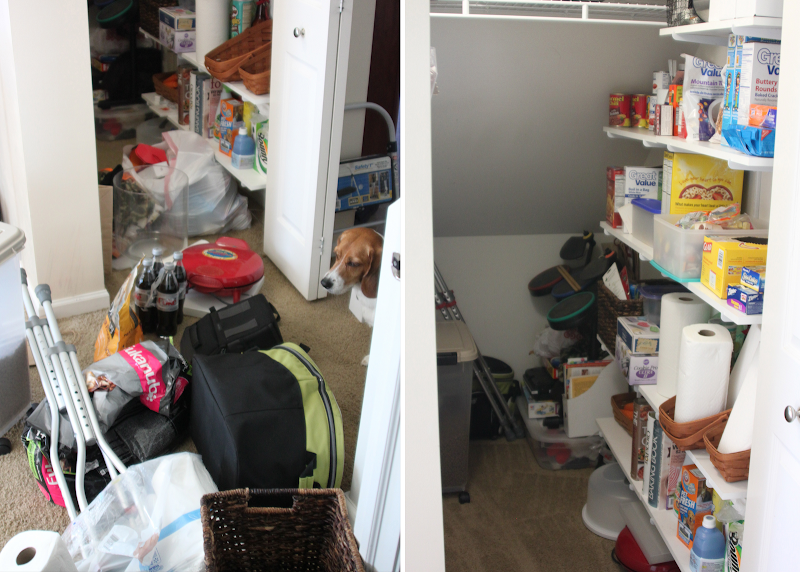 On Saturday I was a busy bee cleaning the house. I was getting tried of looking at the panty and how much stuff was in there so ended up cleaning the whole thing. I could not believe how much stuff I actually had packed in there. Way too many things that did not even belong in there. So here is the before and after shot of what the pantry looks like. Shooter and Hank were such a help they sniffed everything that I brought out of the panty. Too cute! 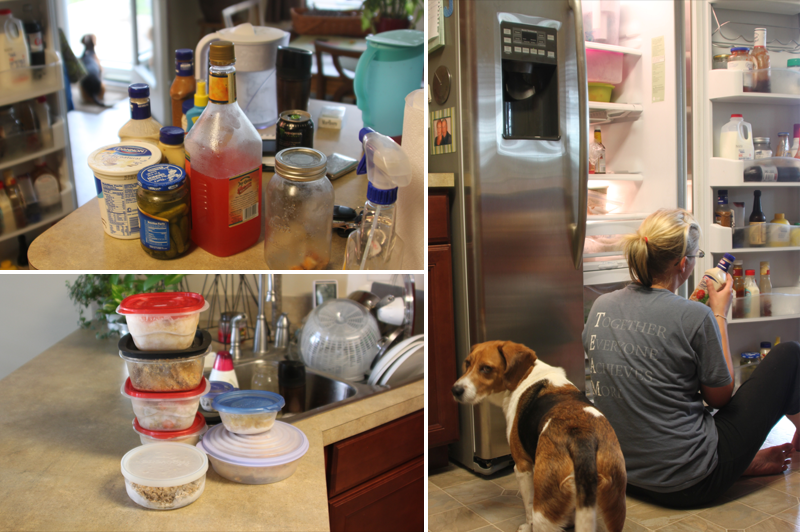 I also went through the freezer and fridge. I had so many things that had expired in the fridge which now grosses me out. Most of it I did not really use. I did laundry and cleaned up around the house. later that night we where going to our friends house to spend the night since our one friend was not racing. It was a busy day but I was happy that I got so much done and ended the day with great friends.
Well that is my week in a post. Now to start on the this week. I hope I can keep up with this new challenge of mine. I still cannot believe that for 8 months I did do a post everyday! I think that this has kept me busy in the house and yard which is a good thing! I can finally check things off my to do list. Hope everyone had a great week as Jon and I did. Till next week!