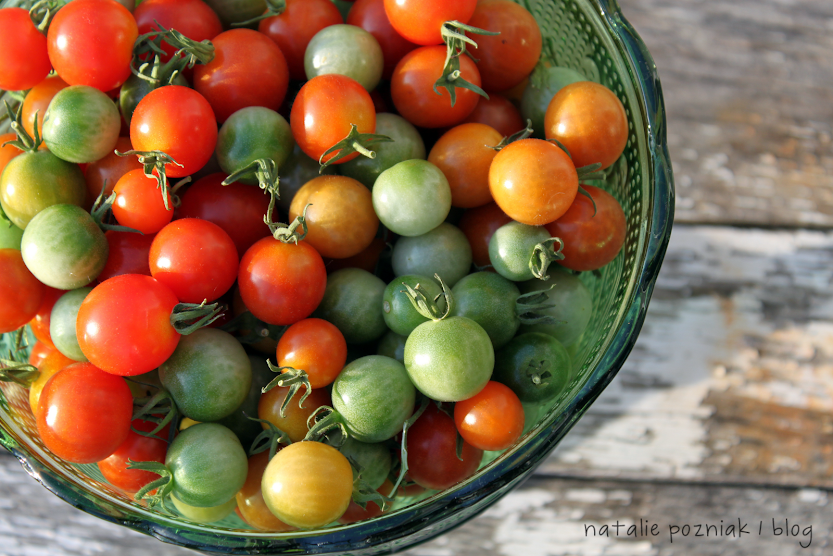 Sunday Jon, I and the boys headed up north to see the family. Since I picked all my cherry tomatoes last week I wanted to make some thing with them. So I found a recipe from Pinterest to make Salsa. I brought over all the ingredients to my mom's house to make a couple of batches of salsa. My mom had to get use to me taking a ton of photos through the process of making the salsa. I also found a recipe to make dry ranch mix. So we ended up making that too. I have not make the ranch dressing yet but maybe this weekend. I got these cute small mason jars from Wal-Mart. I think we figure out that they hold about 2 cups of what ever you want in them. The salsa turned out really yummy. We wanted it more spicy so we kept adding more and more seeds from the jalapeno to the salsa. 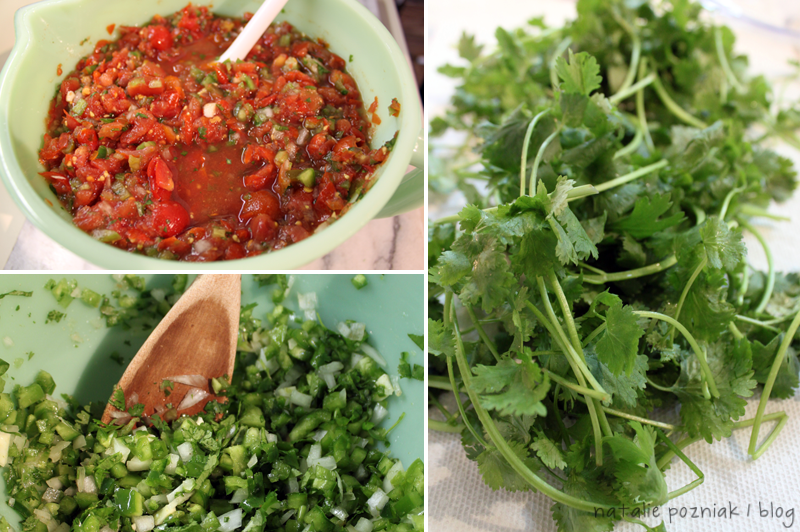 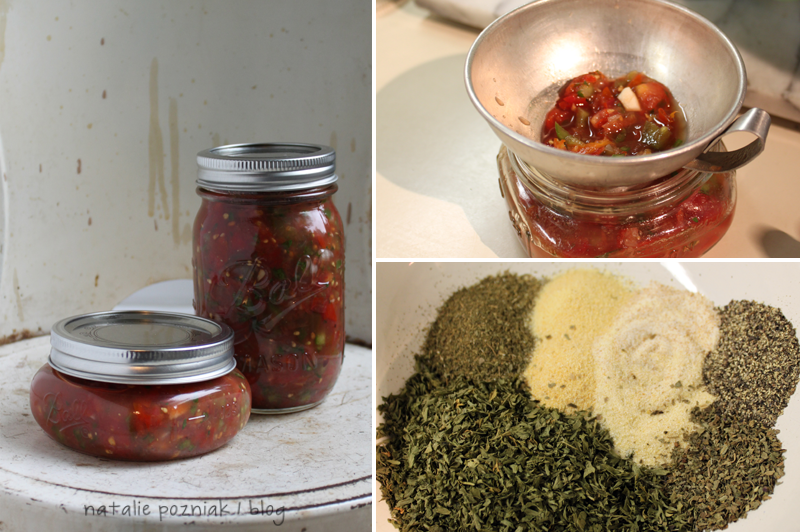 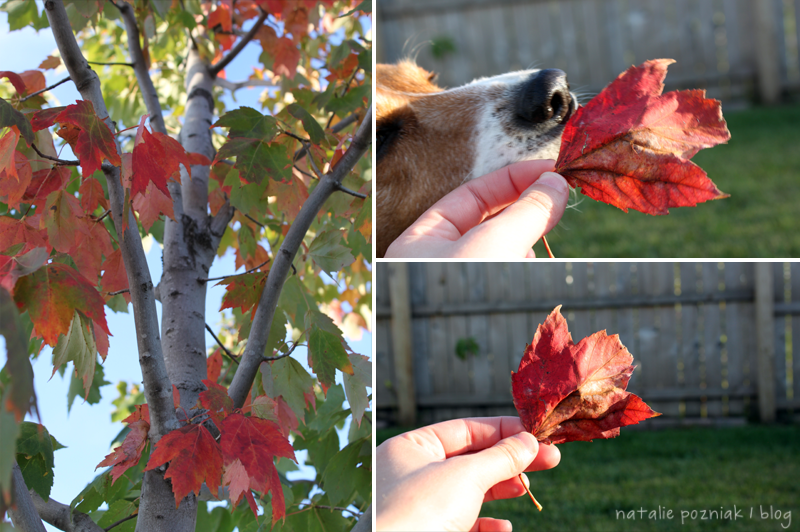 Fall is upon us right now. The leaves are changing right before our eyes. The weather has cooled down to where we do not need the AC unit anymore. This is the best time of the year. Well I think. Some of the leaves have started to fall in the yard. I decided to pick one up to take a photo and Shooter came over and thought it was something for him. It was cute. Jon laughed when I showed him the photo of Shooter. Hank wanted nothing to do with the leaf that I found he was too busy thinking that someone was walking along the fence. He thought that he should be barking up a storm. 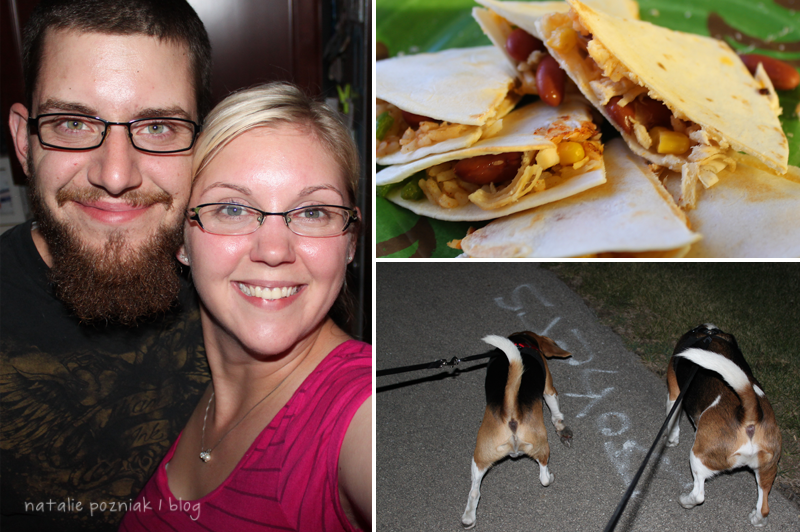 Jon and I went for a walk with the boys for the first time in a couple of months since I broke my foot. It was nice to get out and to walk again. We took a short walk but that was fine by me. The weather has been messing with my foot lately. It is still stiff and I feel like I should be better already. Hopefully soon I will be. Of course on our walk the boys ended up seeing a rabbit in someone's yard along the path. They were baying up a storm and we saw a lady go to her sliding glass door to see what was going on. It was kind of embarrassing since she thought that we were doing something to our dogs. Oh well. At least that lady knows what a baying Beagle sounds like now. 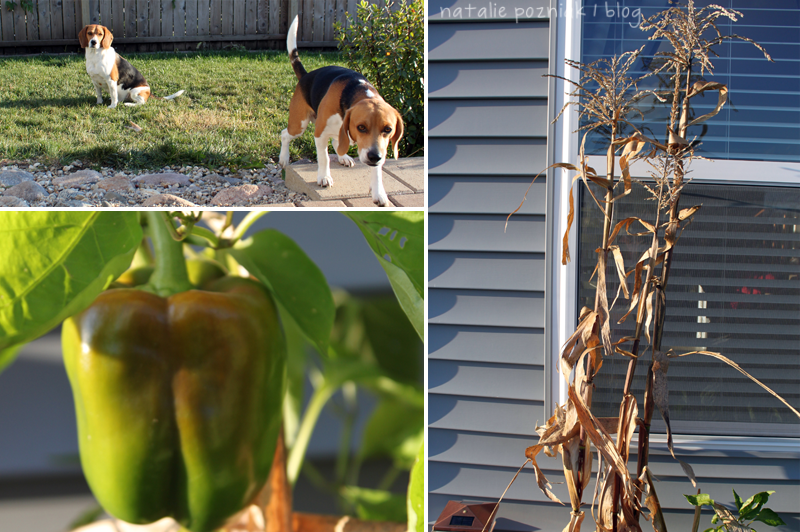 Our garden is at its end. Still have not removed the corn stalks yet but I am still afraid to pull it out since there is a big grasshopper living there. Jon finally got to see the big bug. Our pepper plants are really producing a lot of produce this year. We have about 15-17 peppers still growing. I was shocked. I cannot wait to pull them and have them later in the year. 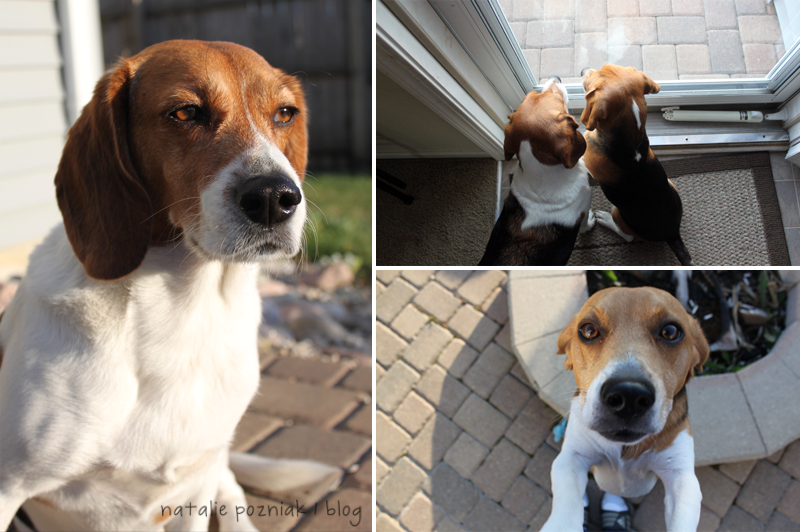 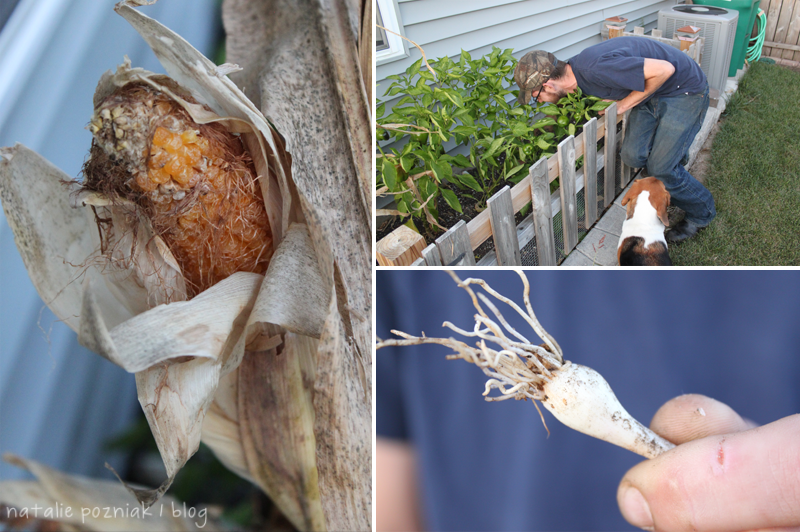 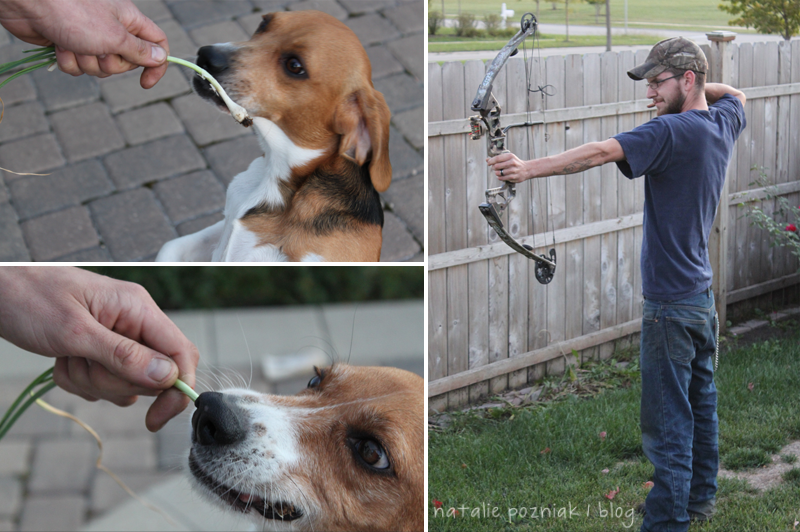 Jon ended up pulling some of our garlic that we are trying to grow in the garen. Shooter and hand really wanted some of it. Jon is busy getting ready for hunting season. So he is practicing in the back yard. Only two more weeks until bow season. I really hope that Jon gets something this year. It would be really nice to have more meat in our freezer. 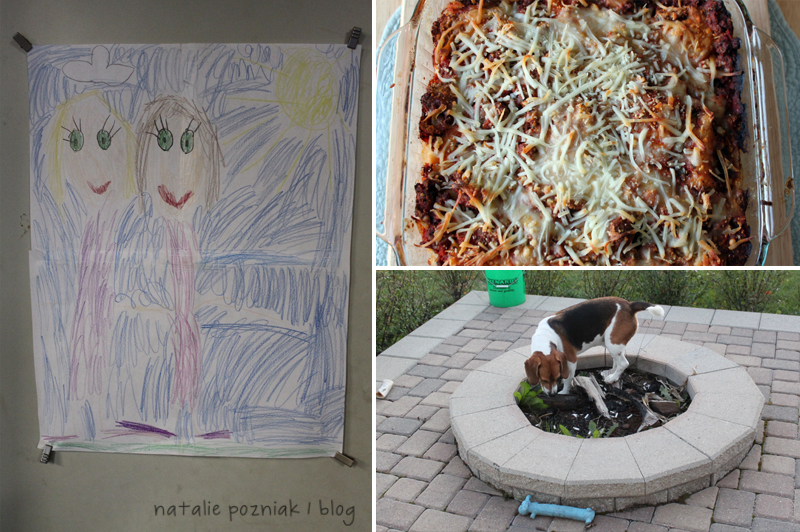 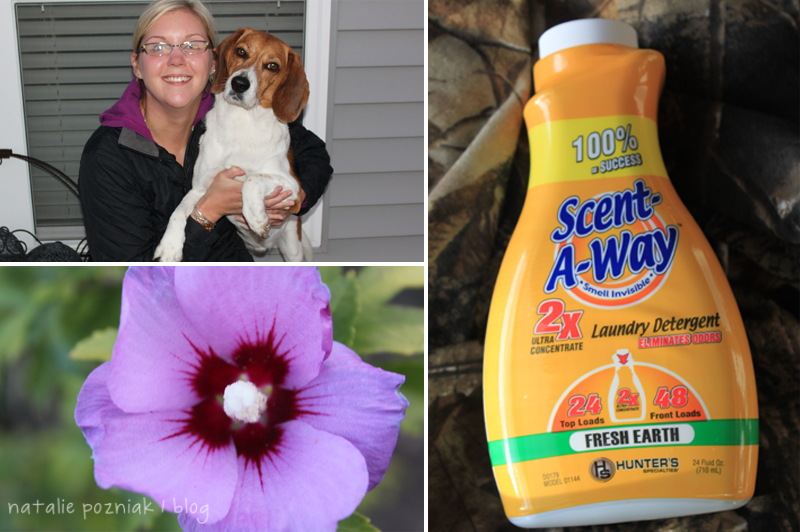 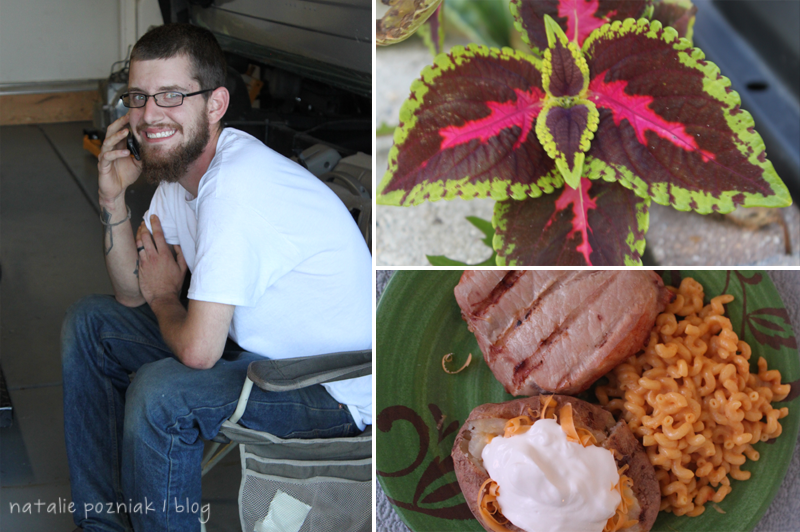 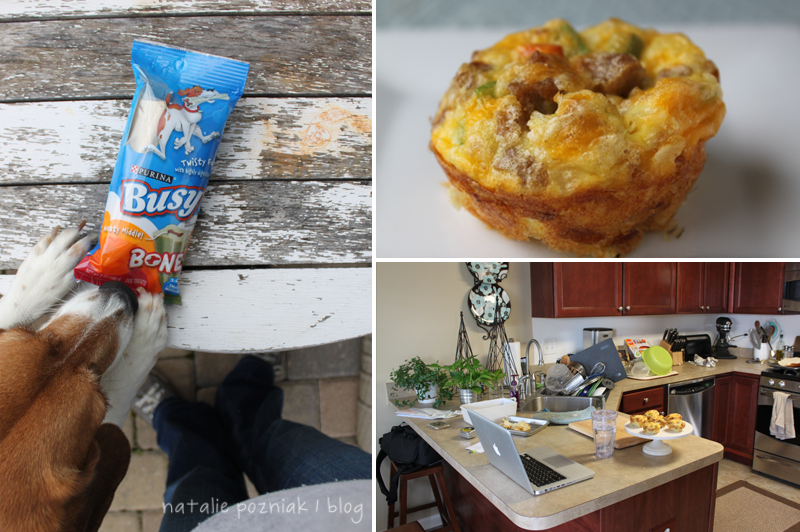 Saturday I got up right after Jon left for work. I went to the grocery store. I was a busy bee around the house. I was excited that I did not have to clean the house. Which I usually do on Saturday. I really like cleaning during the week instead of cleaning all day on Saturday. I gave Shooter and Hank a Busy Bone in the morning. They loved it. Before I could get it outside for them to chew on they were jumping all over me trying to get the package. Silly puppies! 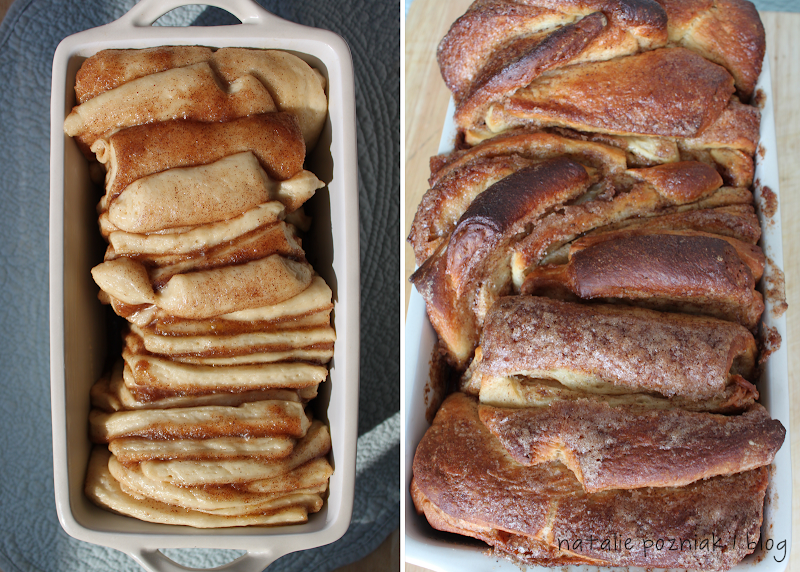 I made cinnamon pull apart bread. It was nice to not worry about cleaning all day and to get back into baking or cooking on the weekends. this was a very long process to make these but it was worth it. They taste sooooo good. Jon loved them. I just wish I could get them out of the loaf pan. I think that I did not grease the pan enough. Jon LOVES the bread that I made. He keeps eating it like a snack. 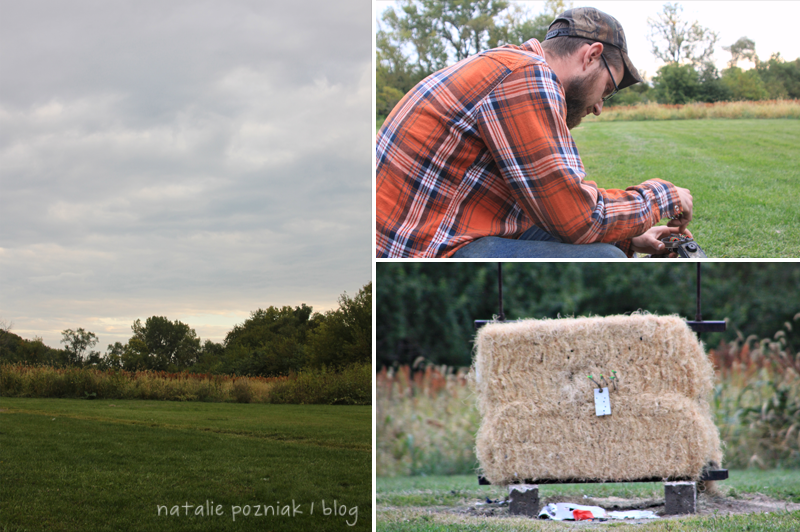 After Jon got home from work we headed to the local archery range near our house. He needs to practice since hunting season is a couple a weeks away. YEAH! Jon did really well. There was someone on the 30 yard spot that he wanted to shoot from but someone was already there. We headed home after a half hour to start on dinner. We roasted a chicken in the oven. Well the whole time the chicken was cooking the smoke detectors were going off. For a hour! Well I think it was longer than that. Hank was so scared from the loudness that I ended having to hold him to calm him down. Jon is busy working on one of the bike that we have in the garage. Hope everyone had a great week like we did. What did you do?